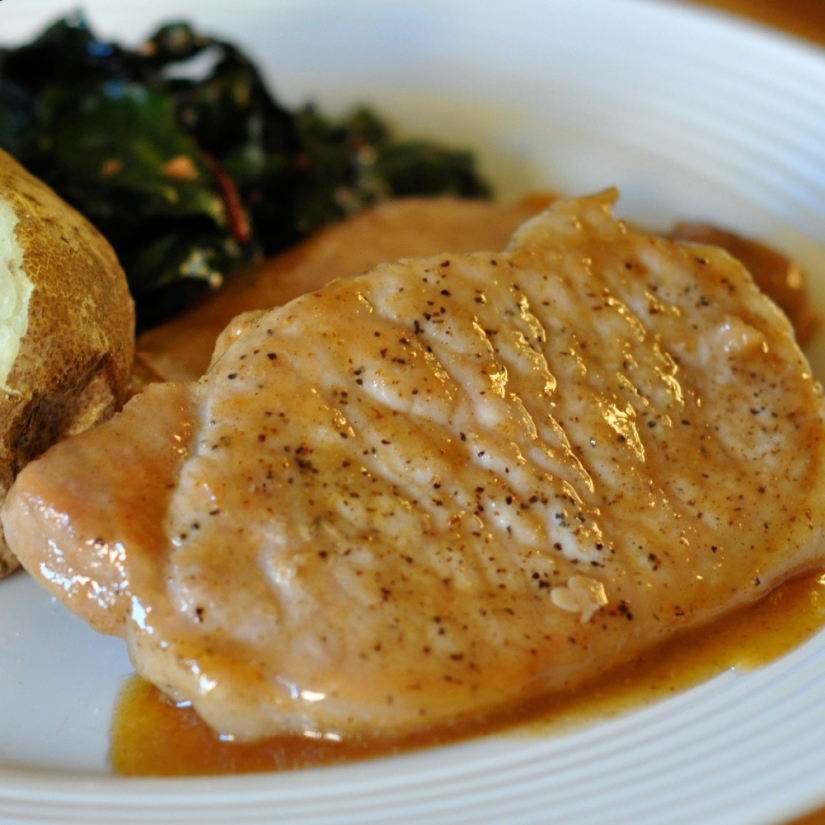 There is just something ultra tasty about a nice cut of tender pork in a savory sweet sauce. This recipe is so incredibly quick and easy that it is the perfect dinner on a work night and yet still classy enough for a dinner party. All the spices give the sauce a nice little pop. This dinner is perfect for everyone in the family. Even the pickiest of eaters will love the sweet flavor of the sauce. My three year old ate almost an entire pork chop. This sauce is also great with a ham steak or chicken breast, heck it would be good on a piece of leather! Try this honey glazed pork chop tonight, the whole family will be begging for more.

STEPS
Note: If using thin cut pork chops, cooking time will need to be adjusted since they will cook much quicker.

What’s Christmas without a glass or three of spiked eggnog? It is a must have item in our family. I am not a huge eggnog fan but I will drink the occasional glass here and there. However, my sister really loves the stuff so I wanted to be sure and have some on hand for her while we celebrated the holidays early this year. Unfortunately, this eggnog comes with a sad story.

This year I thought I would be adventurous and make my own eggnog. It turned out incredible and was actually really easy to make! This was by far the best eggnog I have ever had. I was so excited to share this fabulous concoction with my sister because I knew she would feel the same way. After slaving over the oven all day (okay I’m exaggerating, more like 20 minutes, this recipe is actually really quick to make) I had the eggnog done and poured it into my brand new glass pitcher. It was a gorgeous site! My mom, sister, husband, son, and I went and walked through a Christmas light display at our local zoo. The perfect end to the evening would be a homemade glass of eggnog. I poured the first glass and then went to pour the second when crack! The handle on my new pitcher literally fell off and the entire batch of eggnog shattered on my counter and went everywhere! I was on the verge of tears. However, the one lonely glass you see above survived. Thank goodness! So we all shared this one lonely glass of eggnog and it was the best glass of eggnog ever!

If you have never had homemade eggnog I highly recommend you give it a try. One thing that I absolutely love about this recipe is that the eggs are par cooked in the hot milk rather than raw, giving this a less eggy flavor. It is the perfect holiday beverage and takes on a superior quality being homemade.

Note: If you want virgin eggnog just omit the rum for a family friendly version.

If you would like to contact me, please feel free to shoot me an email at divadicucina@yahoo.com

I would love to hear from you!